When you finally left me for good, I didn’t know if it was for the road, someone else, yourself, or that Taylor guitar. The notes your calloused and hard fingers created as they morphed strings into sounds still linger in my skull. I came home to find the apartment half empty—you’d taken your clothes and all the instruments, including my grandfather’s banjo hanging on the living room wall, leaving our home devoid of sounds and music. You left your favorite jacket and your rifle. I don’t remember what day of the week it was, but it was one of those mornings where the sun was hot and alive but the rain forgot care, and the drops hit the sidewalk rhythmically, like they were trying to compose a melody or recreate a ballad you’d written and taken with you.

I watched the wetness weave a tapestry between me and that old water tower on the hill—you remember it, don’t you? The way it stood tall over the lights of Nashville, boastful and protective, like it was watching over you, or me, or us, or somebody. The entire apartment complex is built in a circle around that tower up on the mountain, and the night we moved in, you wanted to climb it, to sit on the railings and look over the city like God.

“What if we get arrested?” I asked you as we sat at the top, passing a bottle of gin between us.

I didn’t answer you then, or ever, just grinned, let the gin burn the words out of my mouth. When we climbed down, I thought of the waterfall back in the sleepy town I left for you, how I used to sit underneath it in the summer time, my back to the rocks, soaking wet. I’d stare at the woods through the sheet of rain, a stampede tumbling down the mountain, thinking maybe those drops came together for the sole purpose of shielding me from something. You, maybe.

Three days after you were gone, I took your rifle out from beneath the bed, stood on the porch, faced the mountain, and aimed. I shot three times at the water tower, wishing instead I could’ve fired three shots in your guitar case, or you, or whatever it was that made you leave this time.

I stood beneath the water as it fell from the sky like the waterfall back home.

That was the closest I could get to drowning, baptizing myself in something that wasn’t you. Your jacket clung to my body, drenched. Perhaps the next time I would hear your voice, it would meet me from behind a screened speaker, a record with a thousand interrupting scratches. I longed for your music to return to my bones, your throaty, deep voice finding, creating, the words I lost, the ones I was always afraid of. I strained to hear the song in the water as it fell.

(*inspired by the Dixie Chicks’ “Let Him Fly”)

Taking My Turn on the Sin Wagon

The radio stations won’t play the Dixie Chicks. When me and Whitney called this morning, asked if they’d play “Goodbye Earl,” they told us they pulled their songs— indefinitely. Whitney’s mama told me I ought not worry about it, because my daddy would wring her neck if he knew she was letting me listen to secular music. She’s right. Daddy says if it ain’t about Jesus, that’s called secular. Anybody that’s got talent and doesn’t use it for Jesus is sinning. If we listen, that makes us helping with their sins.

Daddy caught me listening to “Sin Wagon” once. He found the CDs Whitney made for me. Whitney can get any CD she wants because her cousin borrows them from the Randall Library at her college. We labeled them wrong to be safe—Steven Curtis Chapman was really Ludacris, Ray Boltz was really Britney Spears. But he caught me once, asked me if I knew what mattress dancing even was. I said I didn’t.

“These women are saying it’s okay to sin. That’s just a slap in the face of God, Aubrey. Do you understand that?” he asked me.

“What did I tell you about the Dixie Chicks?” (Last year, in fifth grade, he came to pick me up and heard me singing Earl with my friends over by the tennis courts. He said singing about murder wasn’t very nice, but I told him Earl deserved it. He didn’t like that too much.)

“That’s right,” he said. “Don’t ever let me catch you listening to this trash again.”

But Whitney and her mama are good secret keepers. Miss Julie is the secretary at the church where my daddy preaches, so she doesn’t want him to know either. At their house, I get to watch PG-13 movies and listen to songs that aren’t about God.

“Well, because Natalie Maines went and shot her mouth off about George W last week, that’s why,” she says. “Said she’s ashamed the president is from Texas because she thinks he’s an idiot.”

Whitney asked if George W was really an idiot. Miss Julie said of course he was, everybody thought so, but just because we think something doesn’t mean it needs saying.

At dinner, Daddy asks if I heard what “my” Dixie Chicks had gone and done. He said people were running over albums in tractors. The used bookstore downtown dumped copies into street trash cans.

“What’s the big deal they don’t like the president?” I ask.

He clenches his fists. He does this when he’s preaching, too. “They got up on that stage and said they don’t believe in God, our president, or our country. They said they were ashamed to be American and ashamed of our military. And you want to fill your head with music from these unpatriotic, trashy, godless women?”

I keep calling the radio stations, asking them to play Earl.

The tide rises and falls in time with my grief: my breaths, like eighth-notes, staccato; the waves of the east coast like half notes, long, hard and sure. Behind the rain, past the line where the ocean met the sky, clouds loom blacker than the asphalt on Broadway, fuller than the swells of the river running beneath JSP Bridge and Titan stadium.

I want to drown in the Carolina sea.

The rain falls in sheets, like music. Like the sheets you scattered around our bed, the one that overlooked the main of the Gulch, your notes strung across carpet in black ink on white paper. It falls in sheets like the ones you used to drape over yourself in the morning, while the sun bathed both you and the guitar. It falls in rhythms; I can hear the iambs and dactyls banging beneath your clenched fist on the breakfast table, measuring your own words. The rain falls like it did the night God sunk the Opry below five feet of water.

I’m slow dancing in a hurricane.

The winds push against my skin, push like the motor pushed the General Jackson down the river on our first anniversary. They push like you pressed those piano keys for days at a time. They push me from behind like they did the morning I wove my way out of Tennessee and into the Carolina mountains. They are relentless, like you.

You are a siren. I could never escape your voice.

The thunder sounds like your rasp echoing through the mountains our parents were born inside of, the ones we fled together. We exchanged gravel roads for skyscrapers and microphones, traded those hills and that river for starless skies and the rumble of the Ryman when it comes alive on a quiet fall night. You always belonged in the lightning on a stage, and I always belonged in the shadows, in the thunder of the crowd drinking in your every note. You have always been the streak of light. I have always been the thunder of applause.

I had to go. There was nothing for me there.

You were a siren, and I had to escape your song.

I scoop the sand in my palms, scatter it around me like we scattered your grandmother’s ashes that spring. I scatter the sand like the peony petals I scattered across our bedroom floor that Christmas you never came home. I scatter the sand like you scattered your cigarette ashes from the west coast, across the mountains, into the Carolina sea, and back again. There is no lighthouse drawing me home from sea. The lights of Broadway, twinkles and shooting stars of Music Row, they’re gone now. These waves drown out your memories, your humming in the corners of me. In this storm, am I finally clean.

I didn’t want to drown in your hurricane—

but you saw shapes in clouds, revelation in the rain, majesty in the mountains that trembled beneath us. My storm was your blue sky. You found stability in that stage on the corner in midtown, reassurance in the stadiums that trembled for you instead. You dreamt of playing hymns at the mother church, of planting your favorite brown boots in that wooden circle. I only dreamt of you. Tell me: while you trailed, eclipsed, shadowed your dreams—where did that leave me?

I want to drown your memory in the Carolina sea.

The curtain called you, and that was my curtain call, my final verse, my fade out. I couldn’t breathe until I was rid of you, until the water filled my lungs, until I was drowning. In the morning, the applause will die, and the spotlight streaks will fade, and Apollo will drag the sun across a brand new sky. In the morning, the hurricane will retreat back to the horizon line. I left Tennessee with your ghost following behind me. Call it wrong, call it selfish, call it running. Call it whatever you want.

I call it a reprise. 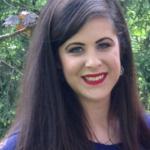 Kathryn M. Barber grew up in the mountains that follow the Tennessee/Virginia state line. She earned her BA from Carson-Newman University and her MA in English Literature from Mississippi State University. Currently, she is completing her third year in UNC Wilmington’s MFA Creative Writing program as a fiction candidate. She is a former intern for Lookout Books and serves as Ecotone‘s Nonfiction Editor. Prior to Wilmington, she lived in Nashville and taught at Belmont University, where her musically talented students began to influence her writing. She is now working on a collection of short stories and flash pieces centered around musical themes. Her work has also appeared in Literary Orphans, Cape Fear Review, Palaver, the Pinch, and Adelaide. For more information, visit www.kathrynmbarber.com.