She stood staring at the snow drizzling down the narrow corridor of light that fell upon her from the streetlamp. It was after two in the morning and the dog had to pee. She had fallen asleep on the pink sofa below the picture window. She had known it was snow from the silence – the only denial the persistent furnace. It was March. A wet snow. It would melt off the roads quickly. She lifted her arms. If somehow she could crawl up that ladder of light, taste the mother cloud from which sifted all these pretty flakes. The dog was digging under the hedge. She should go back inside. Her son had had a fever. She glanced at her sleeve—white. How long had she been standing there, dreaming another life? The snowdrops were blooming, the crocus and daffodils promising their purple and yellow. It hurt to change out of winter into spring. The memories chafed at her naked skin. She must not do this. She would spend every penny she had, buy that old storefront downtown, all just so she could place in the window a large sign saying, simply, Gossamer for Sale. Slowly, she finished undressing, piling her clothes loosely upon the glittering silver. It would be an unusual listing for the Chamber of Commerce. But it just might work. Think of it. She could pay her bills. Even now she was warming to the idea as she lay herself down inside the feathery luxury of this exquisite cloth. 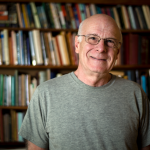 Marc Harshman’s second full-length poetry collection, Believe What You Can, is forthcoming from West Virginia University Press in 2016. Green-Silver and Silent was published by Bottom Dog in 2012. His four chapbooks include Rose of Sharon (Mad River, MA). His periodical publications include Shenandoah, The Georgia Review, Appalachian Heritage, The Progressive, and Emerson Review. He has also had poems anthologized by Kent State University, University of Iowa, University of Georgia, and the University of Arizona. He has written twelve children’s books include The Storm, a Smithsonian Notable Book. He serves as Poet Laureate of West Virginia.