Joe Dub’s in jail. At least that’s what they tell you in the locker room before basketball practice. They’re seventeen, fueled by drama, and waiting for a response to the rumor that your best bud took a Louisville Slugger to Phil Buckmaster’s skull. Buckmaster wouldn’t leave Joe Dub’s girl alone, or she had a thing for Buckmaster, or Joe Dub couldn’t accept that she wasn’t his girl anymore. It’s murky. Like the status of Buckmaster’s vitals. Some say it’s just a concussion, others a skull fracture. Remy heard Joe Dub hit him from behind so hard that Buckmaster coughed out his own brain.

Coach is king so you cinch your laces tight and go diddle a basketball for a couple hours before you drive home and call Joe Dub’s mom. You’re taken aback when Joe Dub answers. Joe Dub? What’s the deal? Nothing, he’s just chilling at the house. Uh, but, Joe Dub, what about this thing? Oh, that. Joe Dub can’t really talk about that. Lawyers. But, Joe Dub! You’re best buds! Can’t you explain? Look. Buckmaster. Baseball bat. Thomp. Out on bond. Anything else?

Joe Dub enlists in the Oklahoma National Guard. This will be good for Joe Dub, everyone agrees. It suits him. After Basic they’ll pay him six hundred dollars a month to go to class at O-Trip while weekend warrioring once a month.

They call Joe Dub’s unit down in October, and it’s a topic at parties for a time, but eventually Joe Dub, like Katrina, fades into the ether.

You hear Joe Dub’s back in town so you call him up, ask him out for a beer. He agrees and after a little digging he stares up at the television and briefly describes the looting and voodoo and the city rising out of water. Then Joe Dub asks about you. You’re twenty-two, full of beer (and yourself) but not discretion, so you tell him about the job you and Remy both got with Chesapeake Energy straight out of college. Your boss – has Joe Dub heard about your boss? The one who bought Seattle’s NBA team and plans to relocate them right here in OKC? Cattle Rustler those liberal pansies in Seattle called him. Anyway, your boss says the oil business is going great guns right now. Oil is downright fecund. It gives and gives and gives. Not only did it bring OKC the NBA(!) but it’s bringing you and Remy raises every three months. Remy’s mentioned splitting season tickets (lower bowl).

Joe Dub sips his beer, keeps his eyes on the television, and you look behind the bar for a pair of scissors to cut out your tongue.

You get married and Joe Dub comes to the reception in a baseball hat and a plain white tee. He holds a card uncertainly, averts his eyes, asks where he can set it. Joe Dub! Stay! Have a beer! Joe Dub wishes he could, really, but he must go. Then the murmurs. A baseball hat? Sad. Bald probably. But still. And did you see his fingernails? Scraped down to the cuticles. How could anyone do that to themselves? Meth probably. Someone watched a documentary once. And Remy begins weaving the tale of that night all those years ago with Buckmaster and the bat. Says he can’t imagine the kind of pain and anger Joe Dub must have felt when he cocked his weapon and took aim. All that emotion. All that life! Brewing. Boiling. Climaxing. So animal. Yet so human. So Joe Dub. Remy expresses dissatisfaction with his own course, fears he will never feel something as deeply, as profoundly, as Joe Dub did that night.

And it’s the romanticizing that causes your own emotions to swell, because Joe Dub’s not some flawed character to be envied from a distant, suspended point of view like a tragic protagonist in a Scorsese film. You set your beer down and slap Remy hard across the face. His cheek goes aflame and you wait to get all that you deserve, which, you’re certain, has come due tenfold now that you’ve told this story. 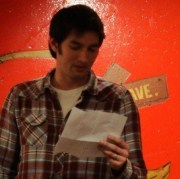 Geoff Peck received his MFA from the University of Pittsburgh and is currently a PhD candidate at the University of North Dakota, where he serves as Editor in Chief of Floodwall Magazine. His writing has appeared in East of the Web, the Houston Literary Review, and the Driftwood Review, among others.