The moon talks to me
and tells me stories of tortures
and burned love;
sad songs are pouring out from
broken window
and here is only the smell
of stale wine and cigarettes;
outside
dogs are wailing in the dark
and nothing is real more than
it should be,
the dark stillness of time
is hanging like a broken clock
and finally the night
locks me in. 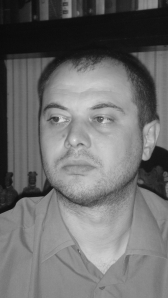 Peycho Kanev is the Editor-In-Chief of Kanev Books. His poetry collection Bone Silence was released in September 2010 by Desperanto. A new collection of his poetry, titled Requiem for One Night, will be published by SixteenFourteen in 2013. Peycho Kanev has won several European awards for his poetry and he’s nominated for the Pushcart Award and Best of the Net. His poems have appeared in more than 900 literary magazines, such as: Poetry Quarterly, Evergreen Review, Hawaii Review, Cordite Poetry Review, Sheepshead Review, The Coachella Review, Two Thirds North, Sierra Nevada Review, The Cleveland Review and many others.